Planning – let’s not over complicate things

Paragraph 55 of the National Planning Policy Framework (NPPF) says that “local planning authorities should avoid new isolated homes in the countryside”, only permitting them in exceptional circumstances. When a planning applicant wishing to diversify by developing two detached single storey dwellings on their agricultural land had their application rejected, they were quite surprised by the reason given. Braintree District Council had decided the buildings would be ‘isolated’, despite being close to other dwellings.

Although the applicants were successful in their appeal to a Planning Inspector, the council launched a series of challenges which proved unsuccessful right the way through to the final Court of Appeal judgment. The court found that ‘isolated’, in the context of the NPPF “simply connotes a dwelling that is physically separate or remote from a settlement” and not one that is removed from services – as was argued by the council.

Perhaps the most important take away from the Braintree District Council v Secretary of State [2018] EWCA Civ 610 case was that the interpretation of policies shouldn’t be “a sophisticated exercise, and need not be dif­ficult”. These were the words of Lord Justice Lindblom who added: “Planning policies, whether in the development plan or in the NPPF, ought never to be over interpreted.”

Click here to read the full article as featured in the July 2018 edition of NFU Pro-Journal. 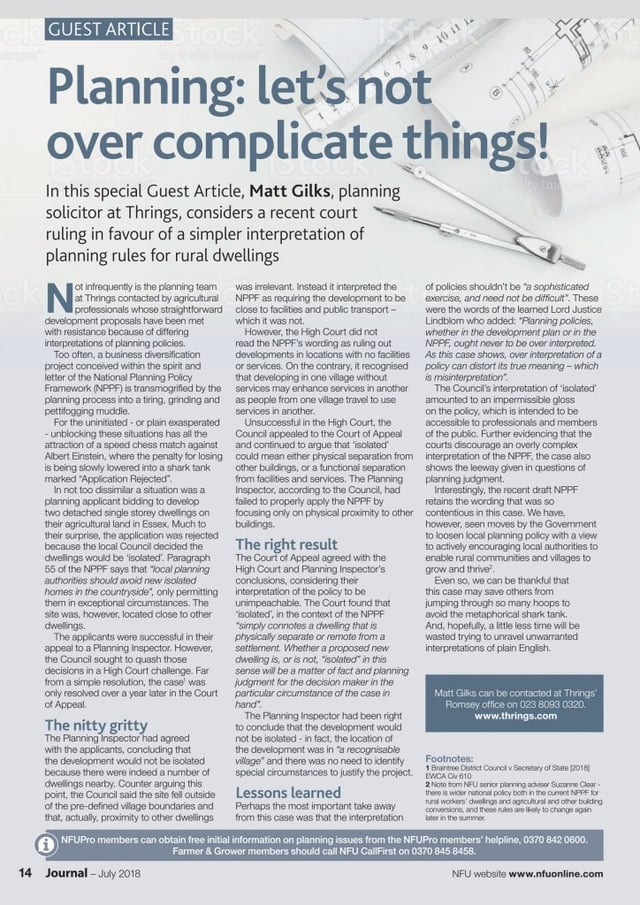 For help and advice on rural planning matters, please get in touch with Matt Gilks or the Rural Planning and Development team.