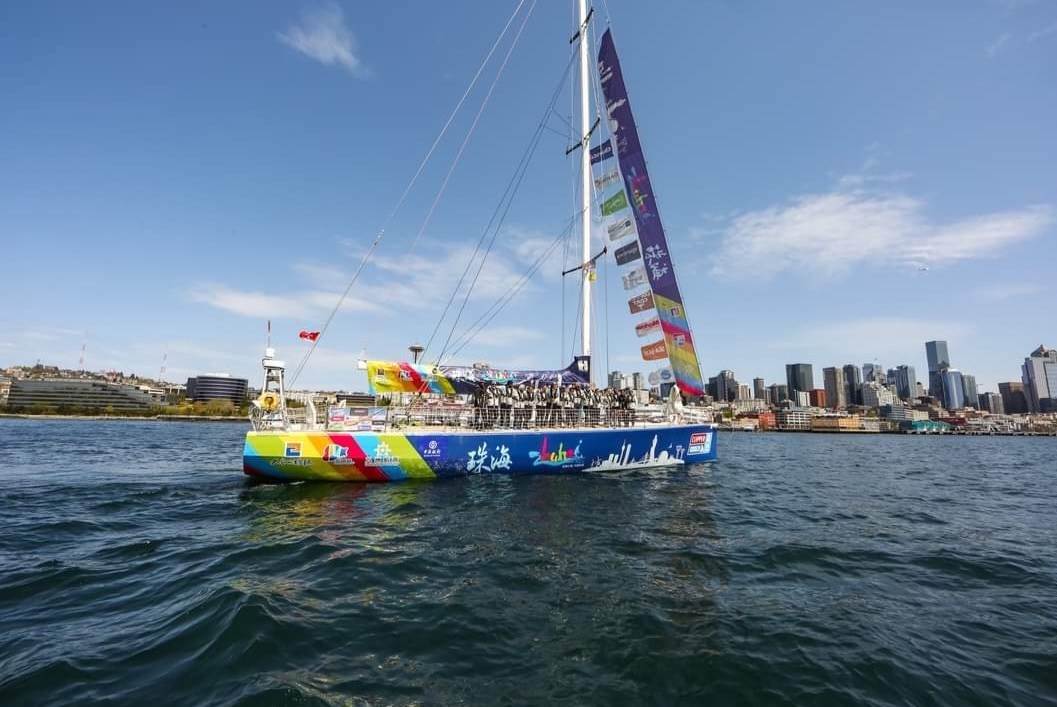 Thrings Links: Catch up with Ben Gillingham as he progresses on the Clipper round the world yacht race.

So here we are; 500 miles off the coast of Seattle, we’ve found a ‘wind hole’, and the boat bobs gently along at around 1.5knots (Around 1.6mph), the sails flapping pointlessly with nothing to fill them. In the past 4 weeks we’ve sailed our yacht, Zhuhai, nearly 6000 nautical miles from the Philippines, north past Japan and across the North Pacific. The journey to this point has taken around a week longer than expected, and many crew members are facing the realisation that their time with friends and family in Seattle will be much less than they’d hoped. And with less than 50 miles covered in the last 24 hours, the situation is getting worse. It’s 3 a.m. and I’ve just come on watch, so I go to make a round of teas, but before the kettle boils I’m called back on deck - there’s a breath of wind, so we decide to hoist the ‘Windseeker’ our lightest sail, designed to harness very light winds. It sort of works, and 15 minutes later we are finally moving, although not in the right direction. But the wind continues to pick up, and 3 hours later, before the watch finishes, we’re moving at around 8 mph toward Seattle. It may not sound fast, but the sense of progress lifts the crew, and we set to work trimming the sails to squeeze every bit of boat speed from the wind. Around a week later, we completed our journey, albeit having found another windhole which eventually led to Zhuhai retiring from the race, just 100 metres from the finish line. The change in mood is just one of many contrasts on this journey.

We began the race in 35 degree heat, when drinking enough fluid to replace sweat is almost impossible. As we moved north, the temperature dropped to the point I was wearing 5 layers underneath my (partially) waterproof ‘foulies’, removing only one of them (but not my woolly hat) to sleep. There is no heating onboard, and a combination of rain and waves over the deck means finding dry clothes (particularly socks and gloves) is a constant battle. We dry our gear by putting it in our sleeping bags while we sleep; it’s unpleasant but works surprisingly well.

The first 2 weeks of racing were characterised by up-wind sailing - this causes the boat to ‘heel’ (lean) over to about 40 degrees, and regularly slam into waves, causing things and people to crash about. Simple tasks like making a cup of tea or putting on a pair of trousers, become difficult and potentially dangerous challenges, leaving little energy for the important business of actually sailing the boat.

After our journey past Japan, we began to catch the North Pacific trade winds we’d hoped for, and down-wind sailing was the norm - our speeds increased to around 250 miles per day, as we surfed huge rolling seas at speeds of up to 28 knots. This may not sound fast, but on a 70 foot, 35 tonne surfboard, it is incredibly exciting!

Having finished the race there is a huge sense of pride in our achievement- we’ve sailed approx ⅓ of the circumference of the earth from west to east, and overcome the physical and mental challenges of 5 weeks continuous fatigue and exposure to cold. We made it to Seattle, and we’ve achieved something very few people do - while I won’t be rushing back to the North Pacific, I’m proud to be able to say I’ve sailed one of the worlds toughest ocean passages, and now I’m looking forward to a warmer leg, as we sail south from Seattle to Panama. It will be a very different experience, no doubt with new challenges, but I can’t wait to find out what it brings. See you on the other side!

More to come from Ben soon.