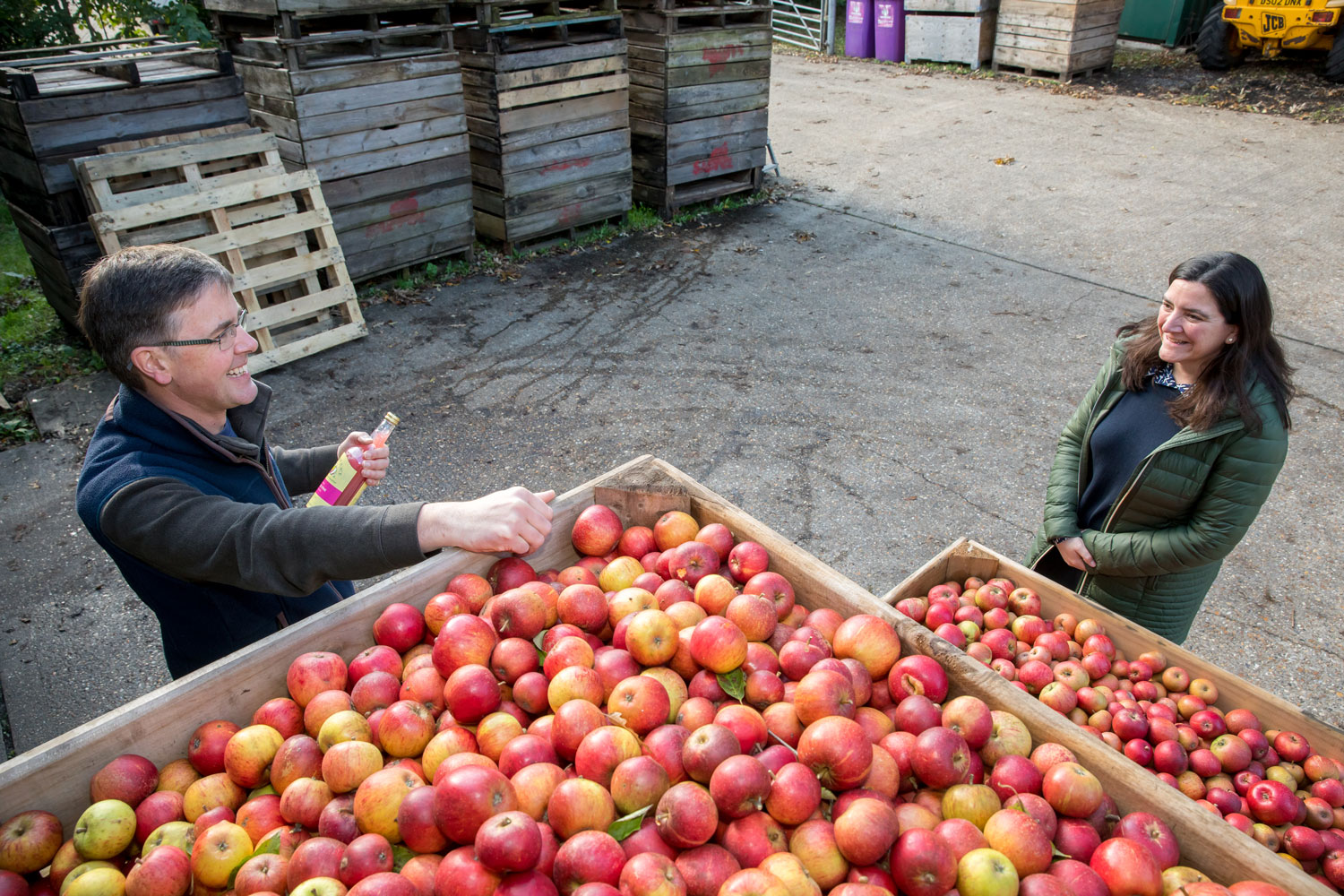 An unexpected family event saw Will Dobson swap a career in marine sales for a life of living off the land. He chats to Karen Perugini, a Senior Associate at the Romsey office of the law firm Thrings, about his juice business.

“I don’t have any kind of grand plan”, says Will Dobson. “I never intended to get involved in agriculture and certainly never thought I’d ever get into apple juice!”.

He says this surrounded by crates of sweet-smelling fruit and hundreds of bottles filled with various kinds of juice, including a rose-hued russet, a traditional cloudy variety, and pairings of apple with elderflower and ginger.

He is at the helm of an operation which sees 500 tons of fruit a year “lovingly squished’, as his slogan goes – most of it from Hampshire growers.

Will’s journey to Hill Farm Juice, in the South Downs National Park at Swanmore, was an unusual one. He began his working life in the marine industry, but when his grandmother, who lived in the house at Hill Farm, took an opportunity to buy the surrounding farmland, he decided to retrain at agricultural college so he could help out.

That led to a second career as a land agent and then, in 2012, the opportunity to take over the juice business, which had been operating alongside the farm since the 1970s. Will describes the change as “a vertical learning curve” – the first of many challenges, with the Covid-19 crisis being the most recent. “Lockdown came just at the end of our final bottling run of the year,” says Will, who says he spends every September to February bottling juice, and the rest of the year selling it. “It was a case of cleaning up the plant and then just mothballing it until we could get going again.”

Sales of small bottles for hospitality businesses plummeted during lockdown – but this was offset by a huge uplift in orders from farm shops. For Will, this underlines the importance of strong local relationships. “We know our retailers by name – you can just phone up and ask how they’re doing,” he says. “We all help each other out.”

This community spirit extends to supporting a local primary school, where each year Will takes a small press to show six-year-old pupils where their juice comes from. “There’s nothing like the first time they try the product and you see the smiles on their faces,” he says. “They just open up and beam!”.

For someone with such a varied career, it’s perhaps not surprising that Will doesn’t see apple juice as the last stop in his journey. His great-great-grandfather was the founder of Beefeater Gin, and he says the spirit is “in the family DNA”. He collaborates with Dorset’s Conker Spirit distillery on Gin & Juice cocktails and ultimately intends to buy a still and start producing spirits of his own.

“I’m only 43 – there’s time yet for more things. I’ve found a still that is very techy and you can make whatever you want with it – vodka, gin, brandy, whisky. I’m working with a guy out in Amsterdam and it’s going to need investment – but one day it’ll happen.”

For now, though, it’s all about juice – and as a father of two very young children, there’s only so much time he can squeeze out of each day. Not that he’d have it any other way. “That over there is my train set,” he says, pointing to the plant where apples are pressed and juice is bottled. “It’s hard work but great fun – and if I was tied to a desk all day, it would drive me up the wall.”