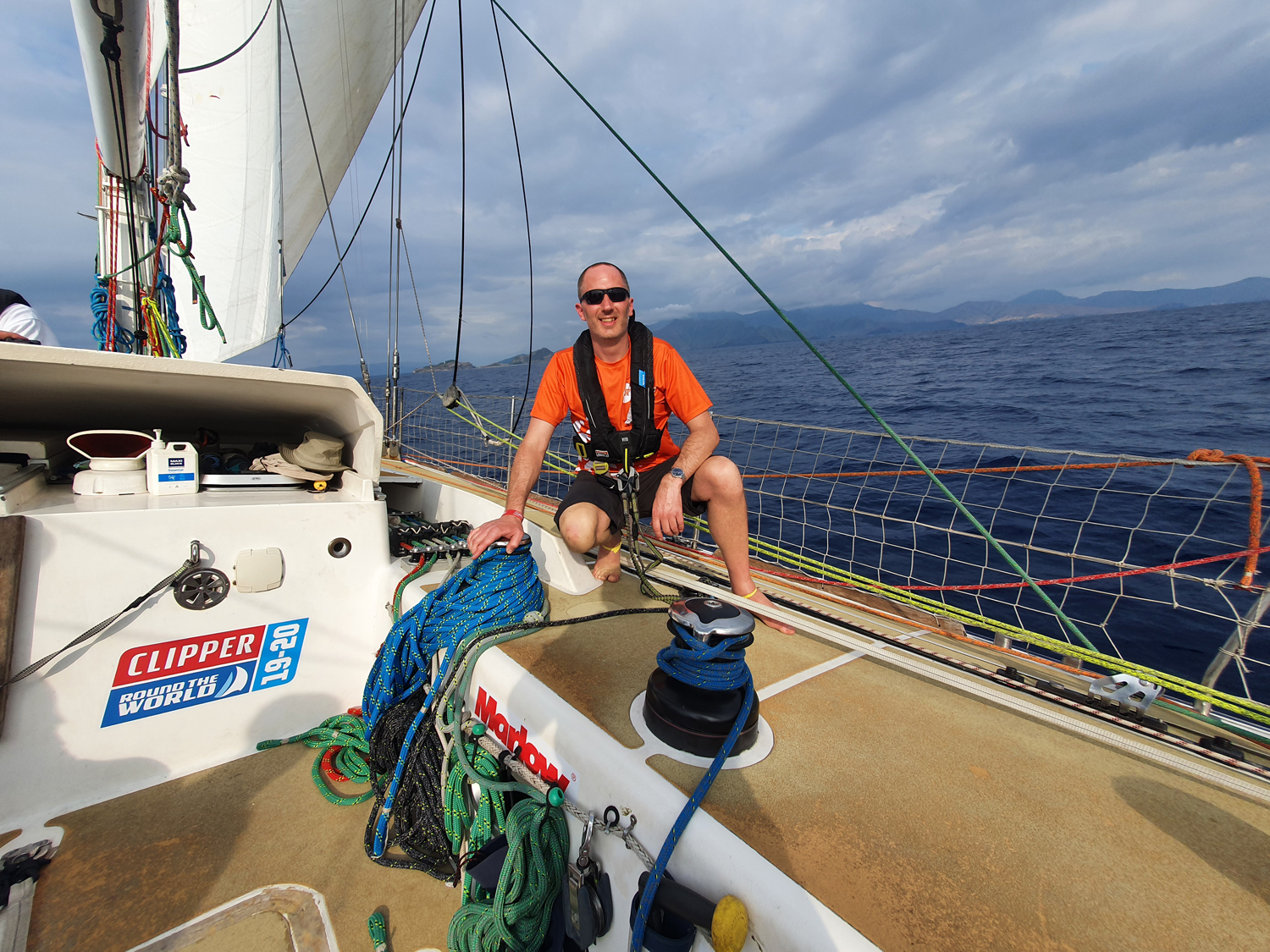 THE JOURNEY TO THE CLIPPER ROUND THE WORLD RACE

Back in autumn 2019, when I had fewer grey hairs, and the most recent pandemic had happened about 100 years ago, I had been working at building our family business for twelve years and was on a rollercoaster many business owners will recognise. We had times of intense pressure, some incredibly hard problems to solve, along with some great successes along the way. Two years earlier we'd been acquired by a large PLC, my role had changed dramatically, and I was starting to think about what should come next.

Having mainly sailed from Portsmouth to the Isle of Wight and back, 'Sail around the world’ might not seem the obvious search term when Googling around for ideas. However, in 2016 I joined a trip from Ireland to England and found myself sailing through a gale. As I sailed through an Irish Sea swell, alternating between a view of water towering above the boat on both sides, to being on top of the world with a view for miles, I knew I had a taste for adventurous sailing, and I wanted more.

The Clipper Race 19/20 edition was already underway, so I applied as a circumnavigator for the next edition, set to take place from September 2021 to July 2022. I was accepted, and I followed the ongoing race closely, as the teams battled each other across the Southern Ocean, around Australia and toward China. And then it all stopped. As China and the US closed down due to COVID-19, it became clear that  the race couldn’t continue; crews were sent home, and the boats left in the Philippines. The race was delayed, first for a year, then another year, and the new timing meant I would be away during a really important exam year for my daughter, which I wasn’t prepared to do, so I reluctantly withdrew from the race.  Then, just as I was giving up on this particular dream, the opportunity came up to join the remainder of the 19/20 edition of the race. In July 2021 was accepted to complete the journey from the Philippines to the UK via the US, and I was back in the game!

Having completed training in the UK between August and November 2021, I flew out to the Philippines in early March, and I’ve just completed my final pre-race preparation. It’s been an absolute joy to finally get on board Zhuhai, the boat which will carry us back to the UK. She is a Clipper 70, designed for racing, which means beautifully light handling and really exciting sailing. These boats are incredibly good at converting wind speed to boat speed, so they travel surprisingly fast even in relatively gentle conditions. They like to heel (lean) over when underway, so the crew need to quickly adjust to living life on a 30 degree angle!

The Clipper 70 is a racing boat, and the accomodation on board is pretty spartan - I have a small top bunk - getting in or out when underway can involve literally walking up the wall to get to a point where I can get a hold on my bunk and pull myself in. Waking up and looking through the porthole opposite gives me some idea as to what awaits me when my watch begins - looking down to see water rushing past below me, coming across the edge of the deck creates a great adrenaline rush that gets me going even when sleep has been hard to come by!

The big unknown with a team event like the Clipper Race is the crew you’ll join - in my case I’ve been really happy with how the team has come together. Our skipper, Patrick is a great role model for the rest of the crew - quietly spoken and relaxed, but with lots of attention to detail when it comes to running the boat properly. He also has a competitive streak built on doing the right things in the right way, so we are rapidly performing better, but without panic or stress. He has also instilled a culture of safety, regularly highlighting the fact that if we take short cuts then we’ll come unstuck, and an injury or damage to the boat will very quickly undo any benefit we might have gained.

The days since returning from training have been very busy. I’ve taken responsibility for victualling (stocking the boat with food), which is a hugely busy role when the boat is in port. We've had 6 days to buy and store enough food to feed 16 people for 33 days. Crew burn around twice as many calories as usual when sailing, so it is key to provide enough energy. We have a tight budget, and a very small fridge/freezer on board, plus all the usual challenges of food allergies and intolerances. (On this leg we have crew who cannot eat nuts, shellfish, chicken and eggs!) I like a good spreadsheet, and I like food, but this has definitely pushed me to the limit!

Scaling up food is also a challenge - our pre-race shopping included 110 cans of tomatoes, 15kg pasta, 30kg rice and 24kg flour (we bake our own bread on-board) among many other things.

Another crucial aspect of preparing food is storing it on the boat. We typically put the food for each day into a dry-bag to make it easy for the crew to find what they need that day. However we also need to ensure it is protected from the wet, (everything gets wet!) and that it won't attract pests. For example insects and roaches love to eat cardboard, so we don't have any boxes on board, and even the labels on cans are removed. Just getting the labels off around 200 cans and writing the contents on each one is a mammoth task!

Anything glass has to be placed inside a plastic bag in case it gets broken- losing the  marmalade to a big wave is bad enough, without trying to clean marmalade and broken glass off everything near it, particularly when everything is likely to be rocking & rolling at the same time!

As well as victualling there has been lots of work to try to minimise the risk of issues with the boat and make life as comfortable as possible on board. Lines (ropes) have been checked, as well as the equipment that works with them such as winches and jammers (to hold lines in place). The deck has been checked for any small leaks which could allow water into the living areas - on the journey across the North Pacific we’ll really find out where those are!). We’ve had a successful week though, and we’re all looking forward to slipping lines tomorrow  (Sunday 20th March), and heading out toward Seattle.

You can find out more about my team here.

Don’t forget I’m raising money for Centrepoint - if you haven’t already donated, please share what you can here.

Thank you to everyone who has supported me on this journey so far!