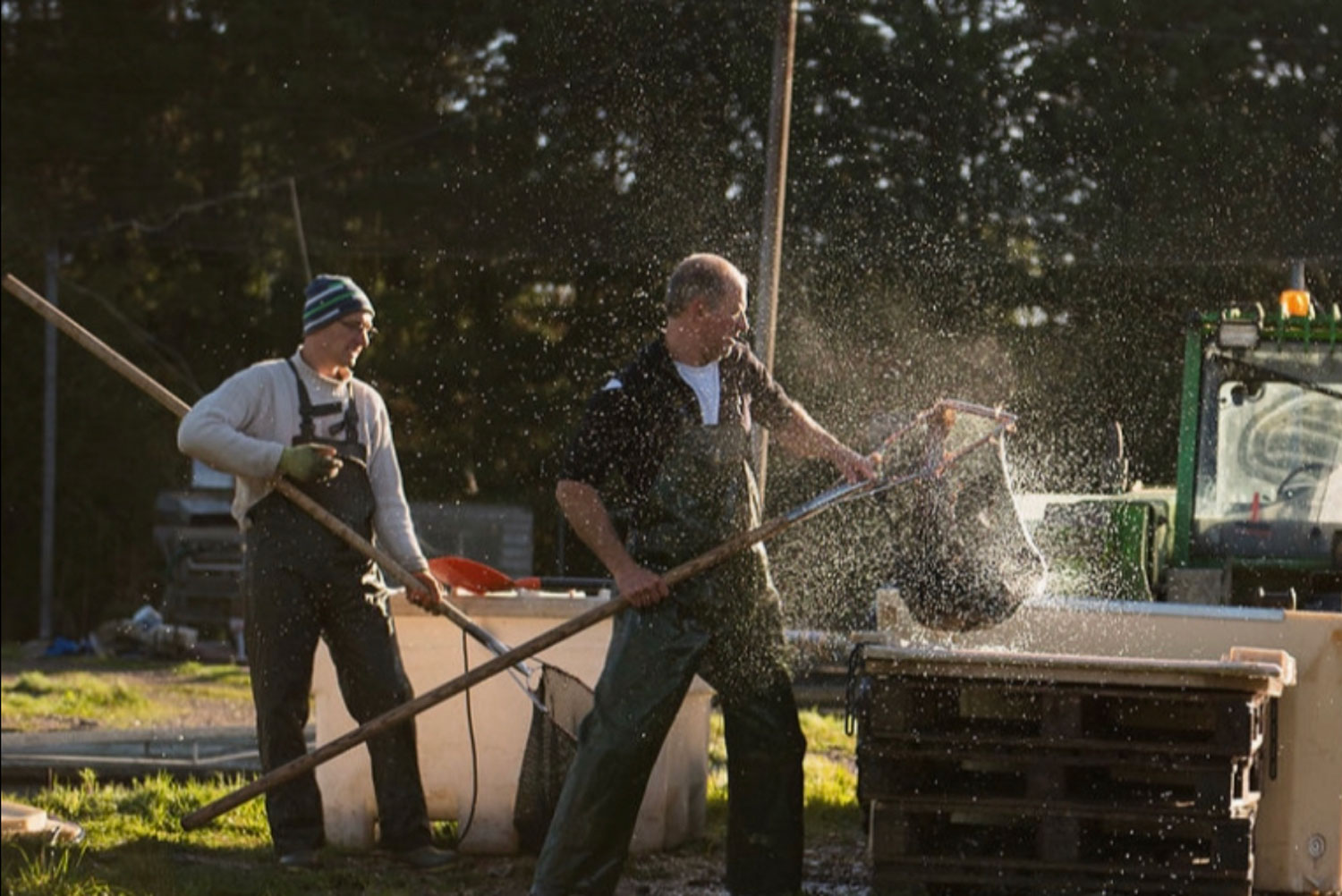 Hugo Hardman transformed the humble trout from forgotten fish to one that hooked the attention of top restaurants and celebrity foodies. Then Coronavirus came along. He tells Mark Charter, a Partner in the Agriculture team at the Romsey office of the law firm Thrings, how lockdown meant he had to re-think his business overnight.

“You can’t furlough a fish,” says Hugo Hardman, parked halfway up the M3 in the van he’s now using every day to deliver Hampshire trout door-to-door.

It’s the phrase he uses when he talks about the rapid change his business had to make when the Coronavirus lockdown shut down the hotels, pubs and restaurants that made up the customer base for ChalkStream Trout.

Overnight, Hugo and his team switched to home delivery – adapting their website to enable orders, putting the word out through social media and leafleting thousands of homes.

“Fleet Services has become my second home over the last few months,” he says, pulling in there for our socially-distanced chat. “I’ve done nothing but deliveries all day every day – it’s the hardest work I’ve ever had, but we have to keep the farms going and keep the business alive, so we’ve had no choice.”

The farms Hugo is referring to are all built on the sites of old water mills and draw from the Itchen and Test rivers. They have been there for 30 years or more, but Hugo’s involvement came in 2014 when he was looking for a new venture after selling a successful coffee business.

The key to success was turning around the fortunes of the humble English rainbow trout, then very much out of favour. “I’m from Hampshire, and wanted to have a business here,” he says. “Through some friends, I met the owner of our farm at Itchen Abbas and at the time they were struggling. Trout had been fashionable in the 70s and 80s but at that time was seen as the poor relation to salmon.”

The farms were mainly selling smaller fish but Hugo had a revelation when he saw some that were much larger. “When I saw the bigger trout I thought they looked amazing – why weren’t we selling those? So I took some of those around my old coffee customers and they loved it.”

With the brand name ChalkStream Trout in mind, Hugo began inviting chefs to try the fish, which are slow-grown to up to 3kgs over two years – far bigger than those found on supermarket shelves.

It’s this farming technique, coupled with the high, fast-flowing water on the farms, that produces the firm, well-muscled trout, low in fat and high in flavour, that the chefs loved. The writer and chef Yotam Ottolenghi, who enthused about ChalkStream in The Guardian, became one of many respected supporters in the culinary world.

“The chef community is very strong, and once they find something new and like it, word gets around,” says Hugo. “We started getting onto the cruise liners, we were in The Ritz, and across Hampshire in the likes of The Pig restaurants, Lime Wood and Chewton Glen. That’s how we really grew the business, through chefs spreading the word.”

Another high-profile supporter is Jamie Oliver, who has filmed at the farms for an episode of his series Friday Night Feast, yet to be screened.

When lockdown began, the TV chef contacted Hugo to see how he could help before posting a video featuring the trout to his eight million Instagram followers. Within minutes, the ChalkStream website had thousands of visitors – a huge boost to the home delivery business.

The service has been so well-received that Hugo has vowed to continue with it even when the restaurant trade returns. “There have been positives,” he says. “We’re hoping that at the end of it all we’ll have a brand that thousands more people will know, and Hampshire will have a fish that’s widely known and respected. For me that’s always been the goal, however we do it – for people to appreciate the fish.”