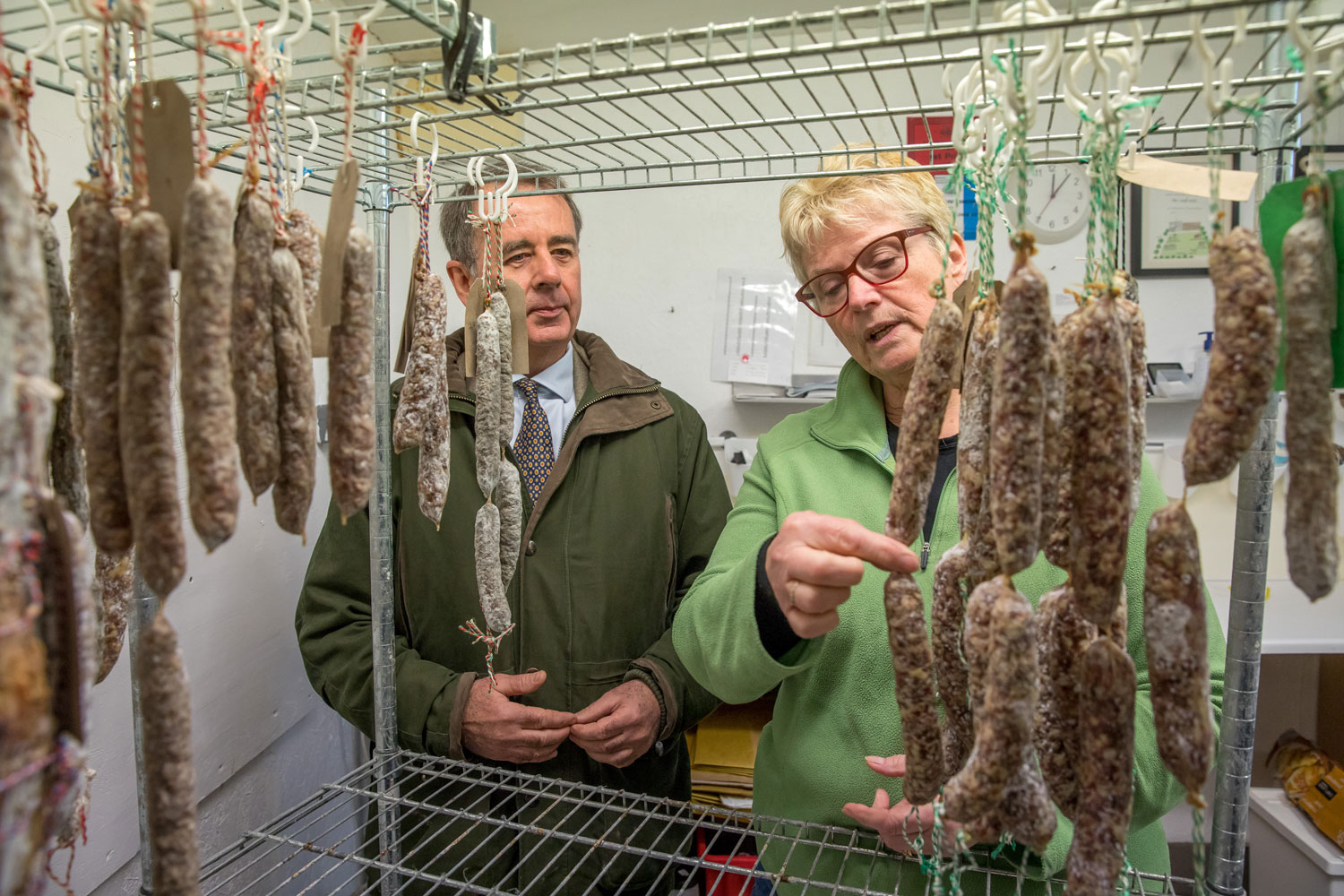 Mark Charter, Partner in the Agriculture team at the Romsey office of Thrings solicitors, meets a husband and wife team who found their niche in British charcuterie thanks to a Royal connection.

It didn’t start with salami. When John and Sarah Mills took over Parsonage Farm from John’s elderly aunt in 1999, he ran a commercial lawnmower repair business, and she was a teacher.

Getting to grips with the 70-acre farm in Upton, near Andover, the couple learned two things – firstly, that it was impossible to combine two full-time careers with running the farm, and secondly, that there wasn’t a profitable future in rearing a few cows for slaughter.

Sarah explains: “At first we thought that if one elderly lady could run a beef business on her own, we probably could. But when the first lot went off to slaughter and I did a bit of working out on cost, we made about £3 an animal. It wasn’t a business so much as an expensive hobby.”

Sarah continued to teach to bring in a steady income, while John focused on getting the farm in shape. The couple experimented with various schemes, rearing traditional British breeds such as Aberdeen Angus and Belted Galloways and starting a meat box scheme.

Later, they invested in pigs, selling sausages and bacon at local events. Then a turning point came in the unlikely form of HRH the Prince of Wales.

“There was a recognition that pig farming was disappearing in Hampshire,” Sarah recalls. “Hampshire Fare got some funding from The Prince’s Countryside Fund, and the idea was to help those of us with pigs to get better value from them.”

The grant was used to bring in charcuterie expert Marc-Frederic Berry to teach a group of pig farmers how to make products including pork pies, paté, and rillettes, but it was air-drying to produce salami that caught John and Sarah’s eye.

They experimented with small amounts, learned about regulation – Sarah jokes that DEFRA are much easier to get on with than Ofsted ever were – and began producing in earnest as well as selling online.

It was a case of it being the right product at the right time, during a surge in interest in charcuterie that Sarah compares to the explosion of British cheeses 20 years ago.

“I think over the last 100 years people have travelled on the continent more and more, have liked the air-dried meat they found there, and found an appetite for it,” she says. “We realised we don’t need to replicate what’s happening on the continent – we need to be different.”

Sarah and John give their hand-made salamis a distinctive Hampshire flavour. Their drying room is packed with varieties including red wine and garlic, beer and thyme made with ale from local breweries, and classic smoked chorizo. One popular version uses watercress from Alresford and Twisted Nose Gin from Winchester.

An unforeseen side-effect of using gin in some products was a surge in interest from women – Sarah estimates that previously 80% of sales were to men, while the figure is now more like 50/50.

Women also make up a high proportion of the guests at workshops which John and Sarah run to teach skills such as sausage making and curing. Sarah enjoys educating them about cuts of meat, how it is reared, and sparking conversations about quality, farming methods, and animal welfare.

The couple were proud to meet Prince Charles at an event where he tasted the products his grant helped bring into existence. Celebrity interest came when Jamie Oliver visited as part of his Friday Night Feast series in 2016 – repeat transmissions still trigger a flood of orders from as far afield as Singapore.

But it’s the local connections the couple value most – selling at events, supplying local pubs and shops, and teaming up with local businesses such as Hattingley Valley Wines for tasting sessions.

“There’s a pleasure in working together and a real sense of community,” Sarah says warmly. “We’re very proud of what we’ve achieved - not bad for just him and me and a few pigs!”