Robert is a litigation partner who advises on high-value and complex disputes, predominantly for clients within the agricultural sector. Robert’s practice centres on a wide range of commercial disputes and inheritance-type disputes with a particular focus on proprietary estoppel cases.

Robert is ranked as a leading individual in his field by both Legal 500 and Chambers and Partners respectively, and has been noted by the legal directories for being “an exceptional operator”, “a top performer in the industry”, “excellent, extremely efficient, very proactive and very personable” and for his “extreme level of detail and Rolls-Royce service”.

Agriculture
Robert’s sector focus and day-to-day dealings with farmers, landowners and agri-businesses has enabled him build a strong understanding of the commercial challenges that face farming businesses and families which allows him to provide a truly specialised level of service and expertise.

Much of Robert’s work is confidential, but a summary of his relevant experience includes: 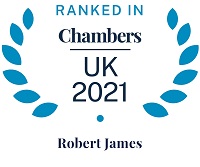