Russell is the Head of our Agriculture Litigation Team and has been ranked for many years in the leading national legal directories Legal 500‚ and Chambers Guide to the Legal Profession.

Russell has repeatedly forced the Government to change UK law. His clients are based all over the UK and his cases have been reported in the Telegraph, Times, Guardian, on BBC TV and discussed in the House of Commons.

As one of the most influential Agricultural Litigation lawyers in the UK, Russell is capable of getting results for landed estates, farmers and landowners in the highest courts in the country. He is a Fellow of the British Institute of Agricultural Consultants, the Agricultural Law Association, the Association of Regulatory and Disciplinary Lawyers, the Country Land and Business Association and a panel solicitor for the National Farmers Union. He is also a regular contributor to leading industry publications, including Farmers Weekly, editor of our agriculture newsletter and is invited to speak at seminars throughout the country. 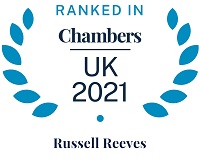 I was delighted to work with Russell on a complicated case involving EU law and public law. I found him knowledgeable, meticulous and a pleasure to work with. - Cherie Blair (Cherie Booth QC)